The President of the United States, John F. Kennedy was shot shortly after noon on November 22, 1963 while riding in the presidential limousine through Dallas, Texas. He was pronounced dead at Parkland Hospital at 1 PM that same day.

On Sunday, the 24th, the man who was accused of the president’s murder was killed while in Dallas police custody. The following day, Assistant Director of the FBI Sullivan ordered the agents in the Dallas FBI office to shut down any further investigation of the murder.

On December 9, 1963 the FBI leaked a copy of their report to the media. In that report, they concluded that: 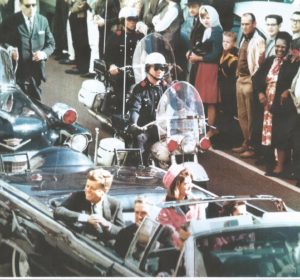 The Report further attested that:

You might be aware that the people at the National Archives recently released a batch of documents related to the assassination of  President Kennedy. Even then, the intelligence folks in Washington DC asked that some documents still be withheld. President Trump gave them additional time to release those.; but not much time.

Historians who have reviewed some of the released documents have not yet found anything shocking. Or, for that matter, information that wasn’t known long ago. Comments from reviewers I have read seem to support the FBI and Warren Commission reports. That is, a single shooter killed President Kennedy; that  all shots were fired from behind the president; and that  Lee Harvey Oswald was the lone shooter. 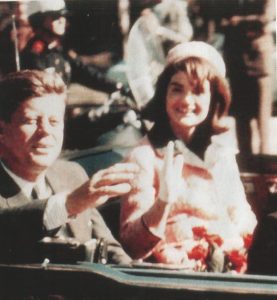 (To the left is a photo of President and Mrs. Kennedy in Dallas November 22, 1963. He is in a motorcade waving to the thousands of people standing along the parade route that day.)

As you might know, I have written two historical novels dealing with the assassination of President Kennedy. Volume I is titled, The Kennedy Assassination: Was Oswald the Only Assassin?  Volume II is titled,  Why Was Kennedy Killed? These books can be obtained at Amazon.com. Enter my name Michael J. Deeb and order either a print or an e book. If you go to my website, www.The Kennedy Murder.com.  you can order the autographed books directly from me via pay pal.

So, the purpose of this message is that  I will send you blogs over the next few weeks relating to the Kennedy assassination. The content will be the result of my research and contained in the first volume, Was Oswald the Only Assassin. In these blogs, I will only use information available to the FBI and the Warren Commission before they issued their reports. I hope you enjoy the read.