Thanks for your interest in The Kennedy Murder series.  Volume 1 and Volume II are available for immediate purchase on this web site. 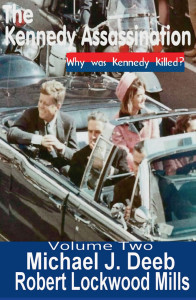 The Warren Commission and the FBI agreed that President John F. Kennedy was killed by a lone gunman, Lee Harvey Oswald. Fifteen years later, the House Committee on Assassinations re-examined the evidence. They announced that he was not killed by a single gunman but probably murdered as the result of a conspiracy.

This House committee hesitated to speculate on who might have been involved in that conspiracy or why John Kennedy was killed in Dallas on November 22, 1963.

In 1979, Michael Burke and former congressman Harold Ryan were asked to continue that investigation. This historical novel will take the reader back to that time. Burke and Ryan will peel back the passage of time and the layers of secrecy and denial to reveal the reasons so many elites were determined to stop the Kennedy election to a second term and thus prevent the implementation of his domestic and foreign policy agendas.

For the first time in one place, the reader will see all the possible conspirators revealed: the military/industrial complex, Allen Dulles and the CIA, FBI Director Hoover, Vice President Johnson, the anti-Castro Cuban exiles, the international monetary cartel, the Mafia and the oil interests of the United States.

Did any of them, or all of them have reasons to kill John F. Kennedy?